A visit in the 'garden city' of Frohnau 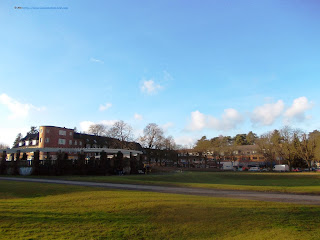 As many other areas situated in the outskirts of the city, Frohnau is considered one of the most expensive places to buy a house. The entire area has entire streets of individually designed villas, few shops and a lot of green areas and parking spaces. With many museums and businesses closed for the long winter holidays and as one of the few places in the city I never visited, I decided this Monday that I should offer myself a little tour there. 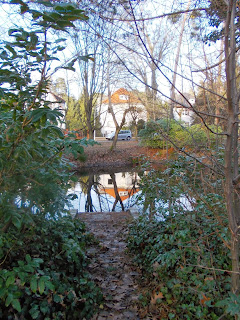 Frohnau is situated in the northwestern part of the city, and has direct S-Bahn line going from Friedrichstrasse, direction Oranienburg. The trains are regular and within 45 minutes I was there. Frohnau was created at the beginning of the 20th century, following the principles of the 'Garden city' English urbanism school of thought. The aim was to build self-sufficient communities, with agricultural, trade and residential areas. 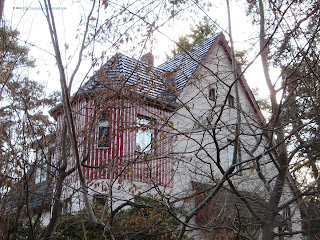 The diversity of architectural style is catching the eye: from very classical German-style buildings, to colourful houses or big gardens and stone stairs and moss covered roofs. There were almost no one on the streets, except people walking their dogs, mostly beautiful huskies. 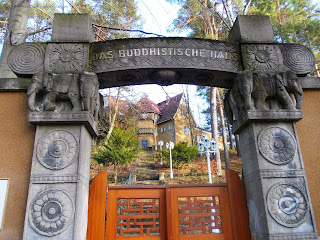 We went slowly in the direction of Edelhoffdamm at the end of which we saw a stone door with elephants leading to a temple on the top of the hill. The mystery of the European looking monk that we had met a couple of minutes ago dressed in a dark robe was clarified now. The Buddhist temple was created by the German doctor and spiritual master Paul Dahlke who lived here till late in the 1920s. 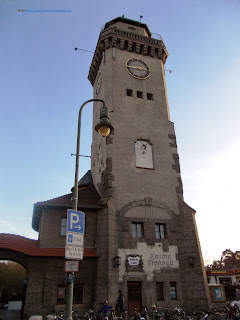 We returned back to the area close to the S-Bahn, where people were intensively shopping. There was even a fine confisserie Schiffke offering fine chocolates. The area around the S-Bahn is circle-shaped containing everything needed for the basic needs, plus a local casino that looks rather as a museum of natural history. We walk on the other side of the circle, through the big alleys that used to be a favourite place for slow horse back riding in the summer. Another portion of calm and quietness and many green spots that makes you forget where you are; maybe somewhere in the countryside?
But new schedule emergencies were calling me back in the busy center of Berlin. In my S-Bahn back home, I spotted other areas that might be interesting to explore any time soon.
To be continued.