Me and the Korean Jazz: Love at first sight 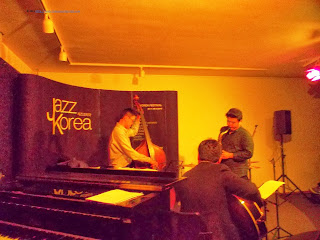 I have a long love story with jazz from all over the world, but I never listened to any Korean compositions or interpretations. When I received the kind invitation from the Korean Cultural Center in Berlin to attend the concerts part of the jazz tour held in various German cities I was intrigued and very curious for a new discovery.
My encounter started with Jang Seungho Project, introduced for the first time to the German public. The original composition explores a theme from various musical sides, develops it and move on to the next musical level. The guitar brings a sweet note to the ensemble, a balance between the creative bass, the quiet drums and the exuberant sax. The leader of the project, the modest and shy bass Jang Seungho is student at Berklee, the place of the best creative musicians in the world (of at least this is my experience by now). 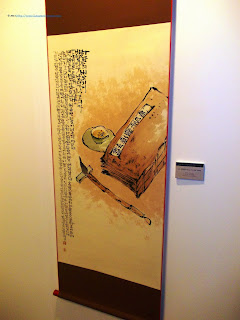 Time for a 10 minute break now, enough for a tour of the Korean Cultural Center. The Center is situated close to Potsdamer Platz, near Dali Museum. It has a library, a corner for children with many colourful books in Korean, workshop rooms and the concert hall that tonight was full. While waiting for the second part, I admired an exhibition dedicated to the Korean calligraphy in the main lobby at the first floor with a pleasant jazz music in the background. 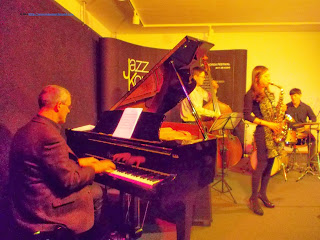 Part two offered another musical surprise: Jin Pureum and her saxophone entered the stage. The repertoire included music from the European repertoire, but she brought an individual sound and special strength to each song. The ambiance in the room changed and people started to behave as in any respectable European jazz club. Of course it was a well deserved encore too.
Out in the cold Berlin, tried to keep as much as possible the heat of the last two musical hours. I discovered another missing piece of the history of jazz and from now on, every time I will hear about Korean jazz concerts, will be among the first to join the jam session.

I received invitations for the concerts from the Korean Cultural Center Berlin, but the opinions are, as usual, my own.
Eingestellt von ForeignerinBerlin um 16:12