The foodie gossip goes that West Berlin has the best Asian and especially Chinese restaurants and it might be right. The big pleasure for me is to discover a place that has not only the food, but also interior design standards that creates a special ambiance. 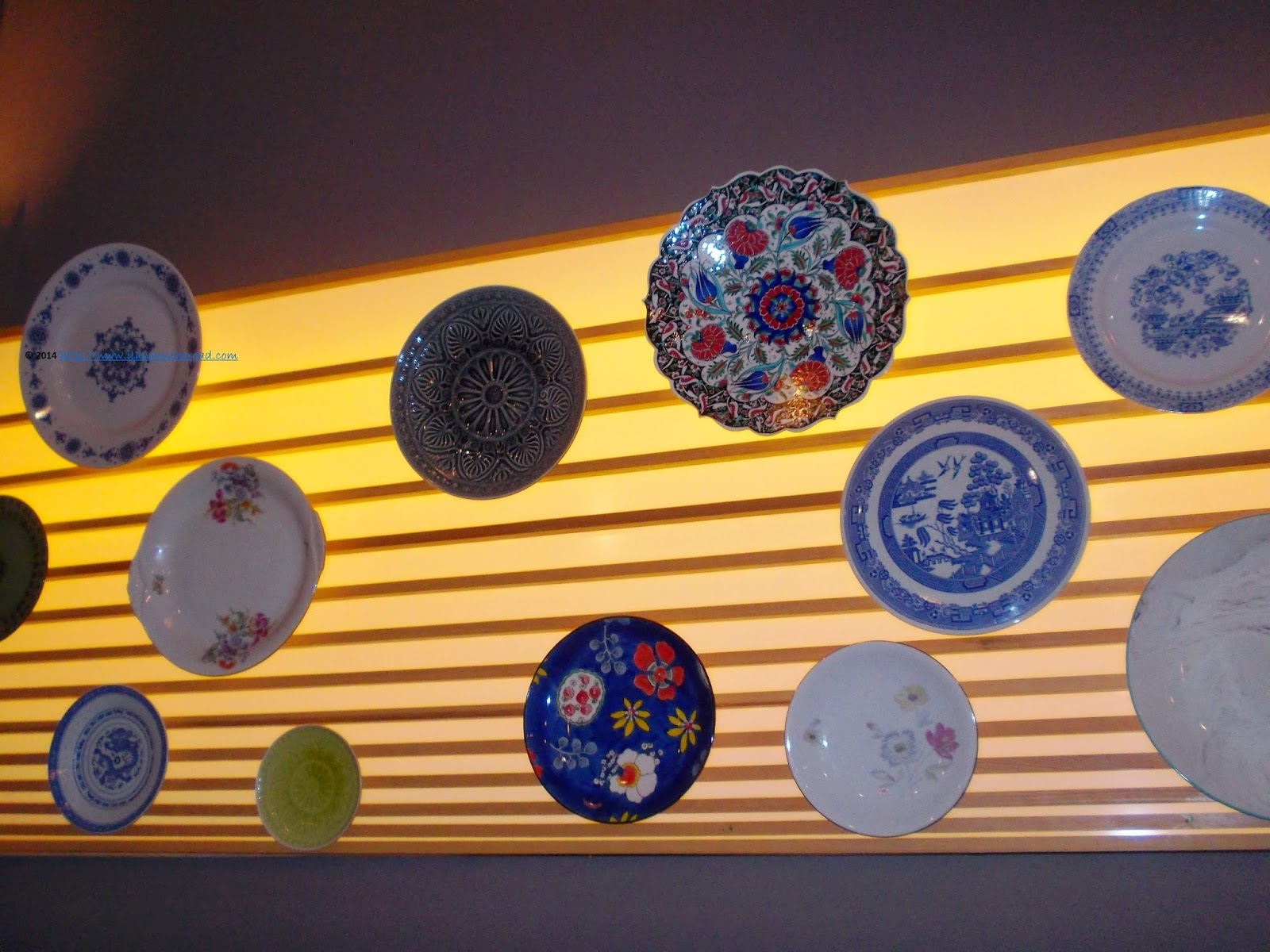 When I find the two ingredients together well I am tempted to come back. In the case of Lychée restaurant, on Bayerische Str. 9, mid-distance between Konstanzerstrasse and Oliver Square, I unexpectedly discovered what I was looking for. Add to this that the dishes I was served too were a little bit more than the average standard IKEA style, which is a stylish improvement with many other restaurant, even those serving good and very good food. The restrooms are looking more modest than the restaurant, yet clean. There are also special chairs for little children. A selection of magazines and daily newspapers help the lonely or waiting visitor to use his or her time get in touch with the latest news. 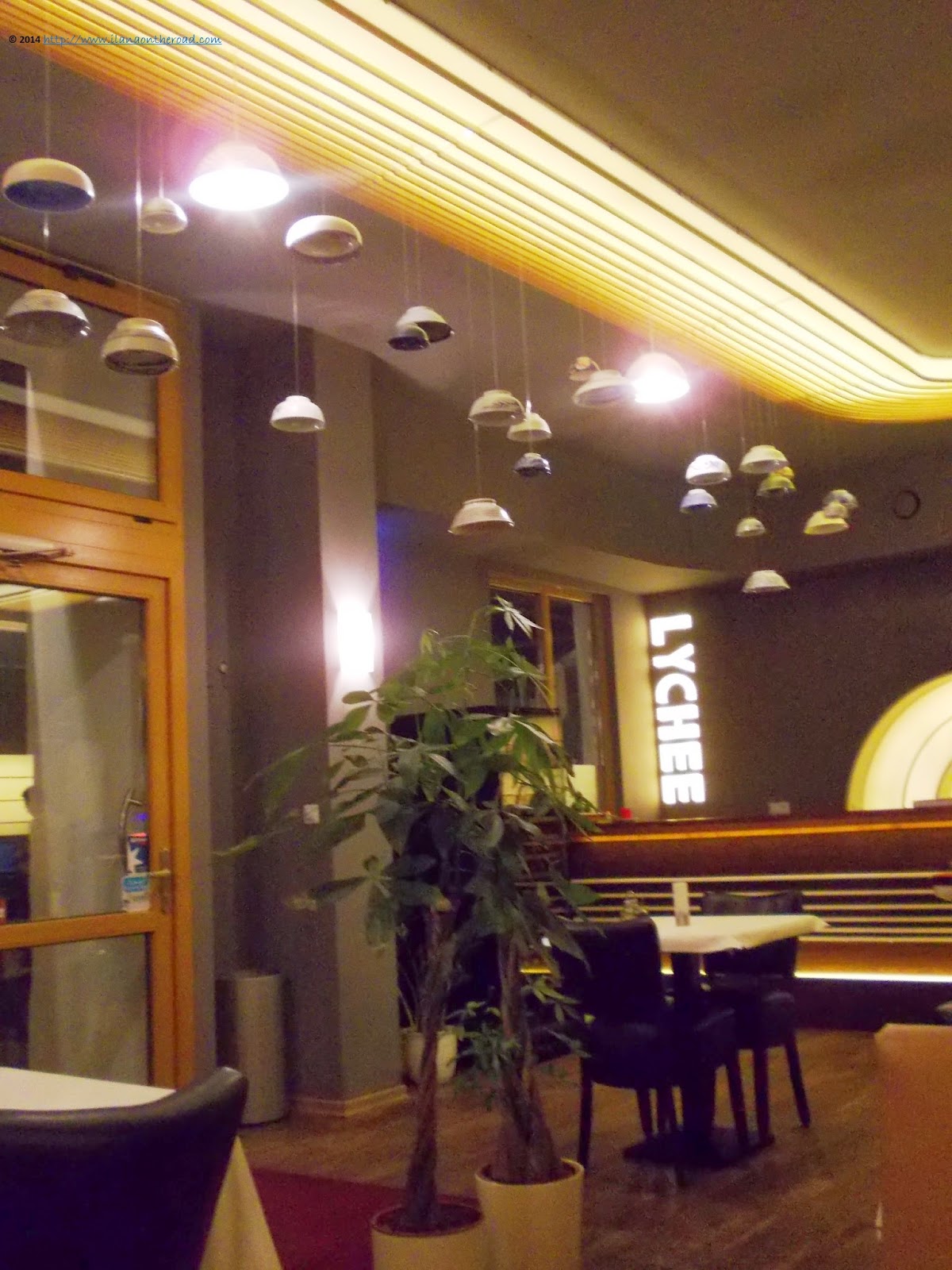 I decided to visit the restaurant on a foodie detective mission relatively late in the evening, in the middle of the week. Three tables were taken, out of around 20, with a very fast service and other customers coming and going for the takeaway orders. Porcelain plates with European and Chinese models were hanged on walls at the eye sight level, near silky pillows, and big Chinese bowls were hanging on the ceiling, some of them used as source of light. 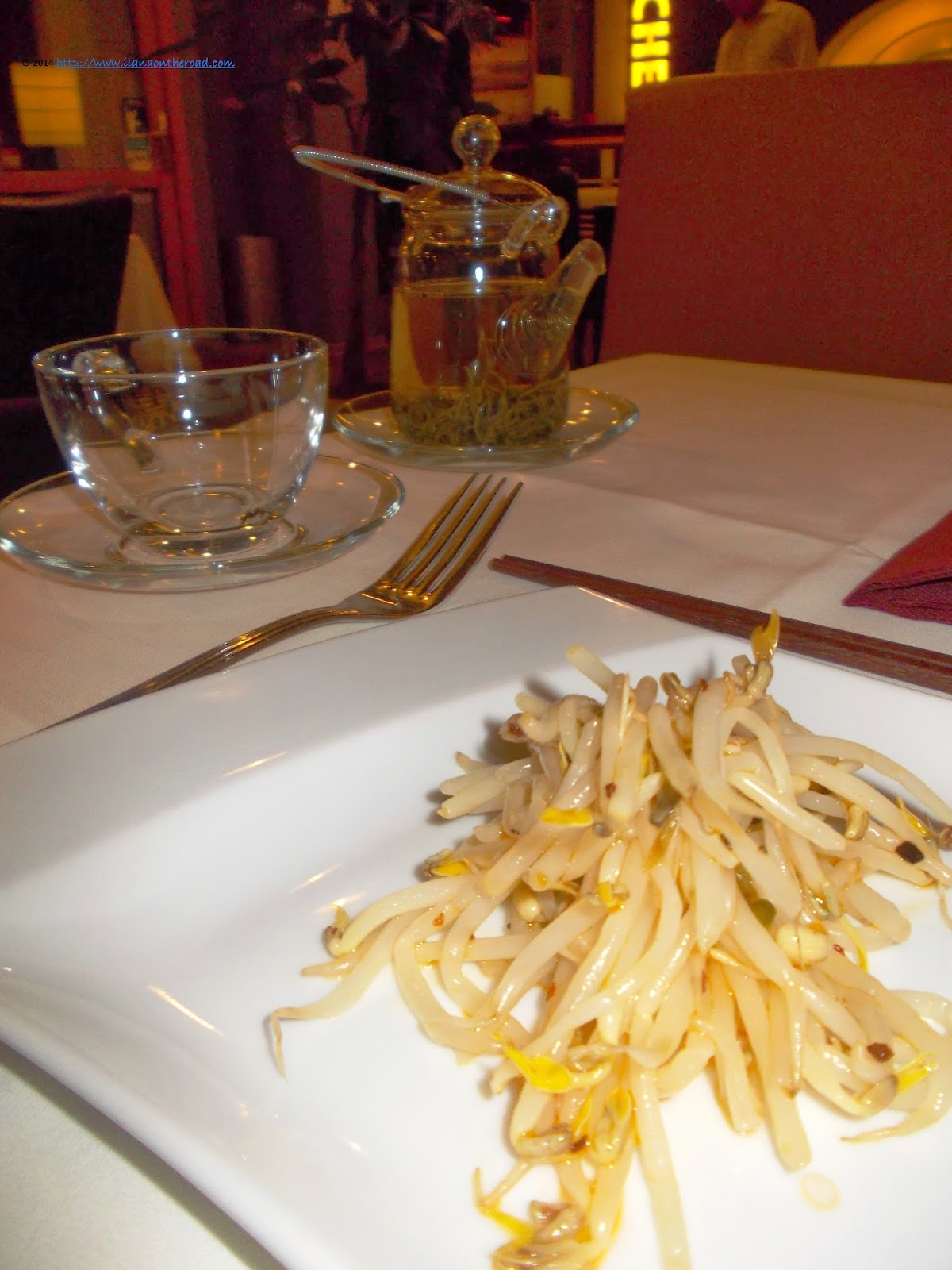 Till my order was ready, I was offered besides my green tea brought in a high-tech looking teapot, a soya sprouts salad. Despite being a bit too oily, it was an inspired appetizer introducing the rest of the supper: spicy enough to make you want to eat more. 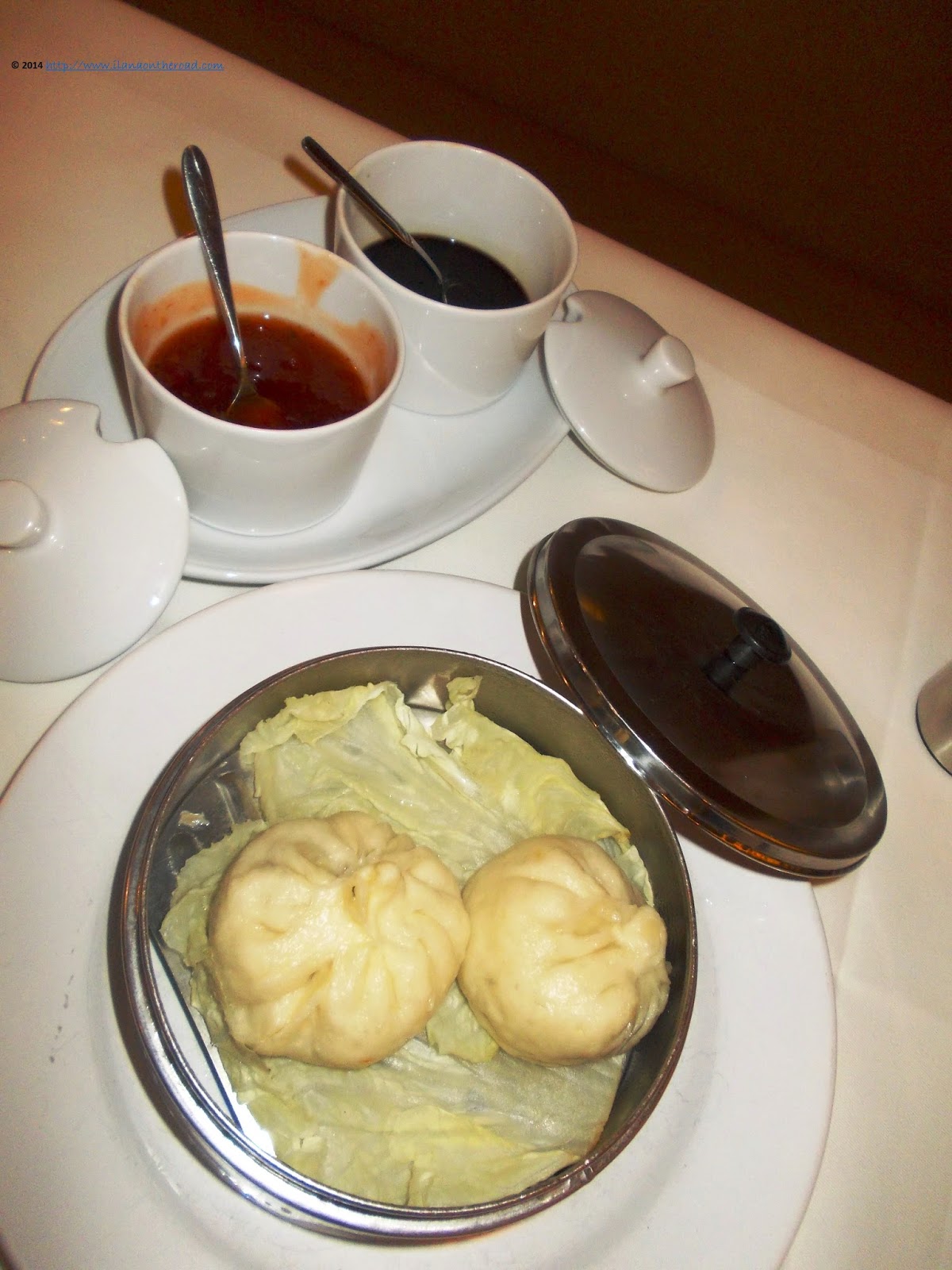 Here comes my first main choice: veggie dim sum, accompanied by two sauces - not-so-hot soy sauce and the relatively spicy sour sweet one. The veggie combination was more than tasty, covered by a dense dough. Trying to take one slurp of tea after each big bit - did I say that I used only the chopsticks? - I felt like a real follower of the Cantonese tradition where eating dim sum is paralleled with drinking tea. 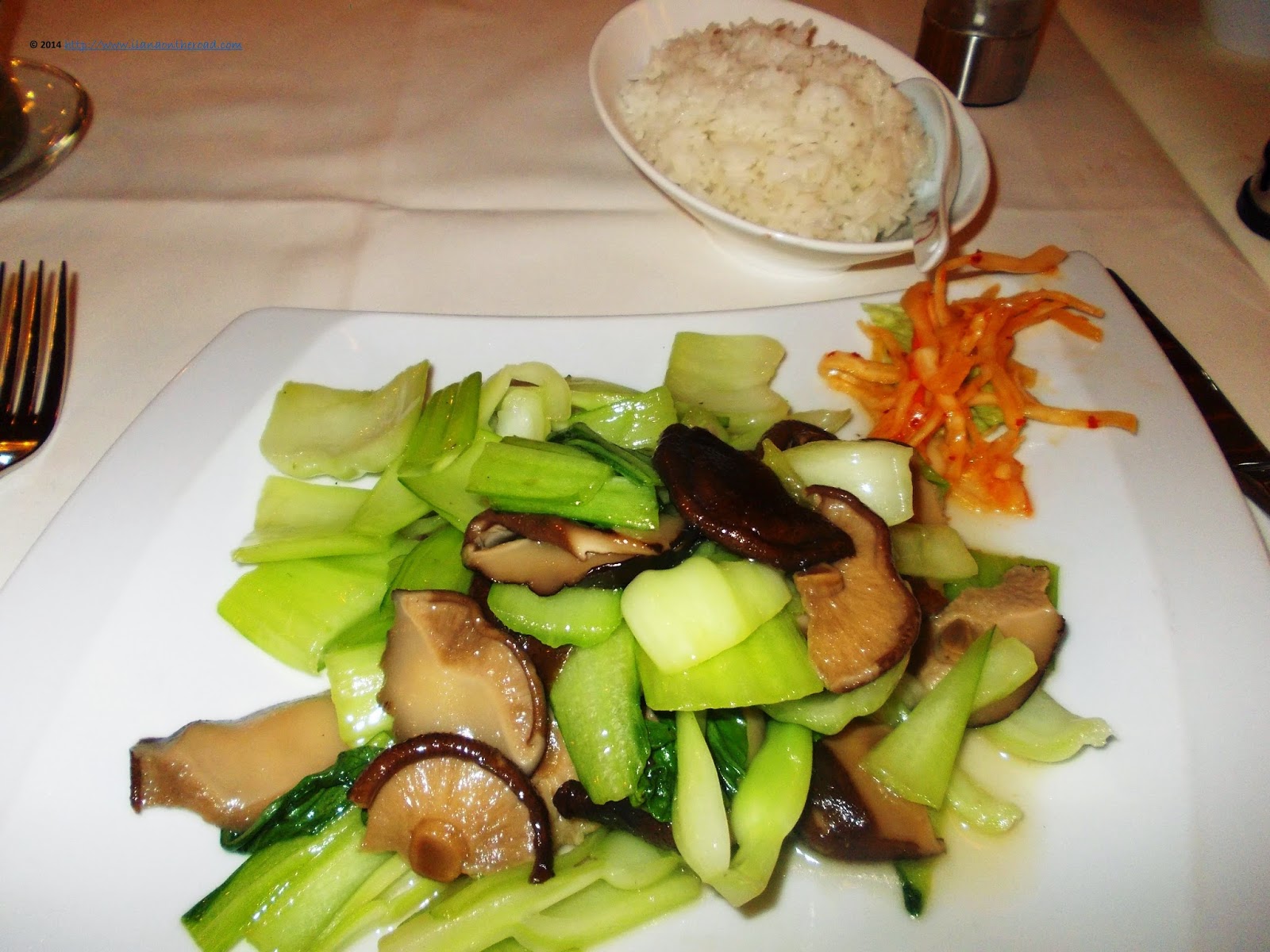 If you don't want to eat meat, you will have a hard time to order a full menu in a Chinese restaurant. Regardless of the geographical part of the country represented by the menu - as I was told later, Lychée focuses on fusion cuisine from the South of the China - meat is everywhere so rather don't have too much expectations from your veggie dish. The combination of pak choi - Chinese cabbage - and Shiitake was abundant, a bit too salty and a bit too oily. The rice was fine - again, but not the lovely Thai sort I fancy usually. 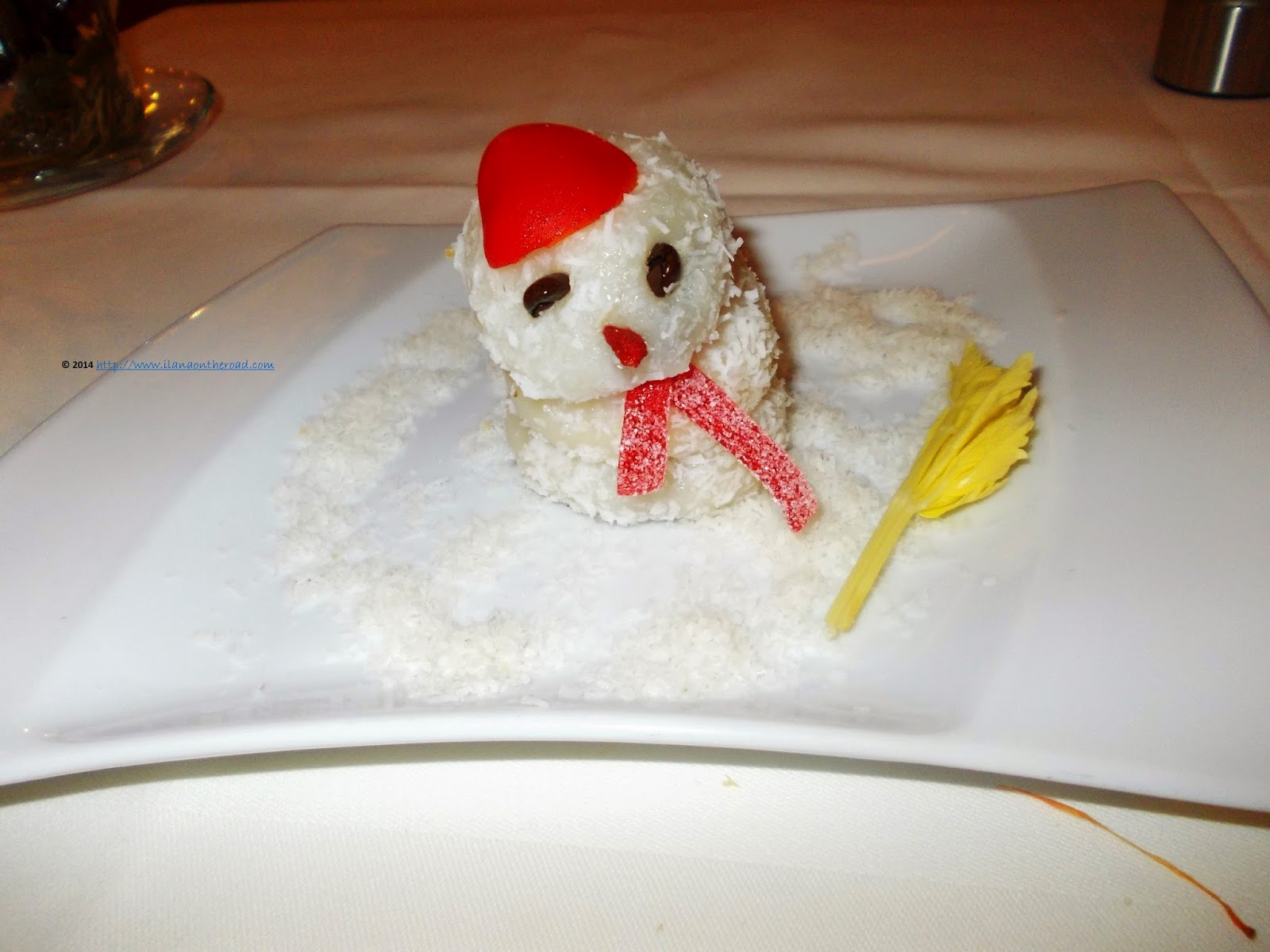 Asian sweets are unusual, first because they are not sweet, second because the recipes rarely include dough, but unusual mixtures of ingredients, like beans paste. Part of the kind service of the restaurant, I was brought this lovely snowman - the eyes made of beans, the red cap - a small slice of pepper, covered by coconut rasps all over the dish. It was a good ending of a long supper, and the limited sweetness brought the right balance after too much oil.
The bill was relatively fine, but not the cheap meal you can get in the Eastern side, anyway. I left behind me the sweet lyrical Chinese music of background and went out in the early Berlin spring, thinking that at least for the dim sums, I should be back soon.