A little lesson about Berlin architecture

I wish I know much more about the history of architecture of Berlin. And more than that, about the history of the architects from Berlin. In the last years, I've seen a couple of information displayed in various points from the city that helps a lot of understand the city. What can be a city without the stories of its houses?
Wish I can find a complete catalogue with the more or less recent history of architecture in Berlin and I am sure that I should find it somewhere. While going to see the Berlinische Galerie - a post coming up soon - I passed by the spectacular building of IG Metall. First, my eyes were caught by the Jugendstil writing style, but when I looked up in the sky, I was even more impressed by the delicate balance of the volumes and the courageous sharp lines of the concave roof. 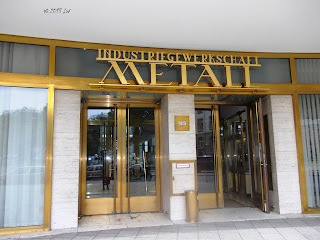 A couple of information about the history of the building and the architect are provided on a The building was designed by Erich Mendelsohn, that together with Rudolf Reischel won the public competition launched in 1928 by the German Metal Workers Union. 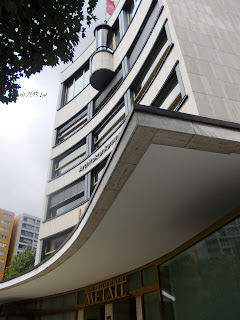 The choice of Mendelsohn was based on his long experience and achievements in terms of designing industrial buildings. Trained in Berlin and Munich - where he went familiar also with the creative works of Blaue Reiter movement - he is the author of various architectural projects in Germany, many of them focused on trade and industrial buildings, such as the department stores in Stuttgart or Chemnitz, Columbus Haus in Potsdamer Platz, or Einstein Tower in Potsdam. Around 1933, there were around 500 Jewish architects in Germany, that from 1 November were banished from practice. Among them Mendelssohn that chose to move to London, where he met among other the next president of the state of Israel, Chaim Weizmann. Later on, he would design the buildings of the Hebrew University of Jerusalem or of the Chaim Weizmann Institute of Science from Rehovot. In 1944, he moved to the US where he spent the rest of his life. 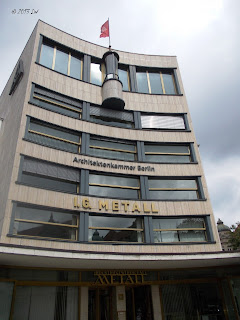 The newly renovated building of IG Metall is hosting nowadays also the offices of the Chamber of Architects.
Eingestellt von ForeignerinBerlin um 03:35